FsAdvent 2018 - Getting My Team Hooked on FAKE

This post will describe the things that got my team hooked on FAKE - an F# DSL for Build Tasks and more. This will be more narrative and opinions than F# code. Sorry.

— Me, ranting in my 1 on 1 meetings with my manager

I have been pushing F# on my coworkers since I started in June 2017. Lots of things got thrown onto the wall, and the things that actually shipped were one project with JSON and WSDL Type Providers and, yesterday, a project built completely by FAKE (also has JSON and CSV Type Providers).

Disclaimer, these are opinions and are listed in no particular order. If you have any feedback, need some clarification, or want to tell me I'm completely wrong, the best place to start will be Twitter.

Things My Team Liked About FAKE

If using FAKE makes developers have fun scripting building, testing, and packaging processes, then that is a win all by itself. Bonus points if it makes them feel like a cool kid.

The FAKE dotnet global tool helps with that too. 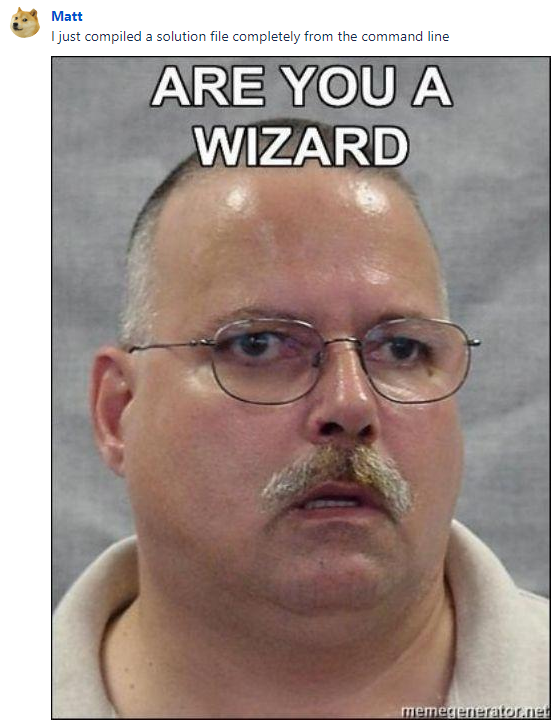 We have the build server - TeamCity but it could just as well be another - provide the full build number and move our build artifacts to our internal package feed. Everything else is done in the script.

The biggest win is how short the feedback cycle is for building. How quickly can you debug a build error with a particular TeamCity build step? Probably not as fast as you could on your own machine. Don't you normally remote or ssh into the problem build agent if the error log doesn't make sense anyway?

I have my favorite FAKE features, but these are the top ones according to my newly converted team.

We apply the same NuGet package attributes to every assembly, so it was really easy to just let FAKE do that for us. All you have to do is substitute the values you care about and the NuGet required minimum fields.

I don't think any of our projects publish developer written release notes, but FAKE makes it easy to publish them in the NuGet package Release Notes field. I think release notes from the developer are a good idea.

"I still don't love functional or F# for my day-to-day work, but I'll be damned if FAKE and Type Providers aren't my favorite things right now."

Things My Team (and others) Did Not Like About FAKE

I will use the following pattern to list the concerns:

I tested out FAKE near the end of its FAKE 4 lifetime. Once FAKE updated to version 5 I tried to script the build for one of our big legacy applications. I did not get very far. It was way too much process to replace at once, and I could not present F# or FAKE in a good light with a partially migrated build.

Fortunately, I found an NDC talk Immutable application deployments with F# Make - Nikolai Norman Andersen and Nikolai's sample weather-in-harstad repository which put me on the path of making a coherent argument and demo build script for the team. I encourage you to watch Nikolai's talk in full. I'll even repeat the link at the end.

Some weeks later, we start two greenfield projects - one large in scope and one small. Here's the "secret" way I got FAKE into the build - I just did it. F# first, ask questions (or forgiveness) later, except this time it worked.

Due to priorities changing frequently, we have not had time to use FAKE to script our deploy process and post-deployment smoke testing. The team and I still really want to do that, but time constraints unfortunately make it smarter to just let Octopus do it's job.

Other than time constraints, I want to do some preparation work to confidently demo a solid FAKE deploy script to the team.

If any of these problems sound really easy to you or you have already solved them using FAKE, please let me know!